Intermediate meeting with Rudolf and Doris

Intermediate meeting with Rudolf and Doris

In April, Rudolf and Doris came to visit their beloved HR312 Saida, to see the progress of the work and to discuss further steps in the refitting project. Incredible: At first they came to Ellös for the sole reason to change the teak deck and once they were here, so many more interesting possibilities opened up thanks to the great people in the Refit Team and their very personal engagement in every detail. It turned into a much more far-reaching refit than originally anticipated.

Where else is there better expertise in boatbuilding than in Ellös, where people have been building boats for centuries. Further, the Team is so dedicated and love these boats so much that they put their heart and souls into their boat projects.

When Doris and Rudolf came to visit their Saida in Ellös, we started looking at the teak deck that was almost finished by Ellös Team & Marinservice AB and enjoyed to look at the extra work that Kai and his team had put into all details.

We thereafter discussed the hull, where Rudolf at first thought that it needed to be painted. However, Carl thought there was no need for this and that his experts could polish it to its former beauty. This was an unexpected good news for Rudolf.

However, on these older HR’s the blue stripe is painted and not part of the gelcoat and hence it would be a good idea to have Anna paint the blue stripe while the windows are being replaced anyway. 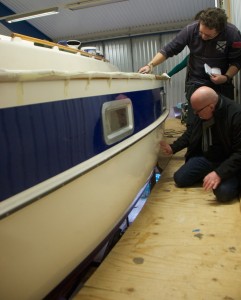 Carl and Rudolf discussing the hull 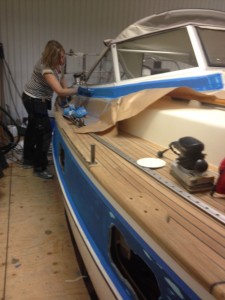 The rigger Daniel also got a chance to talk with Rudolf. Daniel is our local official Seldén dealer and the head rigger for the Women’s international world Swedish match championship in Lysekil. He discussed Saida’s rig with Rudulf in every little detail. When investigating the rig, he found cracks in 5 of the 6 mast fittings for the shrouds. One of them was so cracked that it easily broken into two pieces by hand. Frightening findings! Obviously it was only a matter of time until Saida would have lost its mast and Rudolf feels so good to be in the safe hands of Adams Boat Care and his careful team. 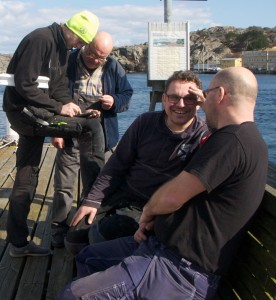 The rigger Daniel in deep discussions with Rudolf, while Carl Adams and Christer Verta are having a nice chat in the April sun

This is what Rudolf wrote after he saw the photos of the cracks in the rig fittings:

Thank you for the photos. Well, I have to do some deep thoughts regarding this. I have never really checked the mast very thoroughly. I think the reason was that I do not have any “relationship” with it – meaning experience. Very careless and dangerous! I have learnt from this – thanks to the thorough work by Daniel. I am ever so thankful!

Daniel also did a full service of the Furlex and I think the photos talk for themselves to illustrate that it is a good thing to have the Furlex taken apart and serviced by an official Seldén rigger, such as Daniel. 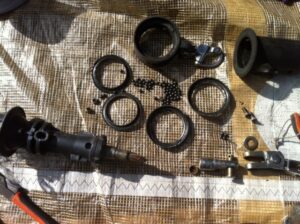 The Furlex taken apart before the cleaning and servicing 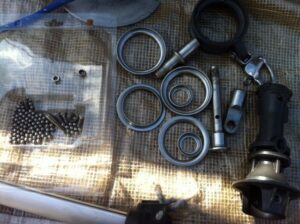 The serviced parts ready to be put together again 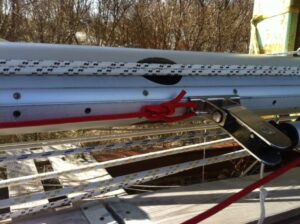 The new running rigging: Having new halyards is a joy for eyes and hands 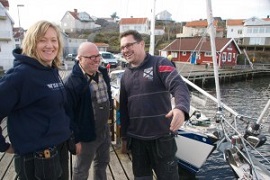 When customers come to Ellös to see their boat during refit is a great opportunity for a new friendship: Anna, Rudolf and Carl having fun while talking refit 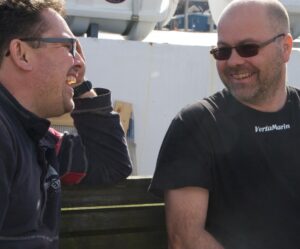 This photo says it all: The members of the Refit Team of Ellös love working together, love Hallberg-Rassy boats and have a very close contact with customers. Carl Adams (left) and Christer Verta (right)

It is a great fortune to have such nice customers like Doris and Rudolf, who appreciate the efforts and engagement so much!

On their last day in Ellös, Rudolf and Doris brought a big wooden box onboard Regina Laska: Their favorite wines. How nice of them. 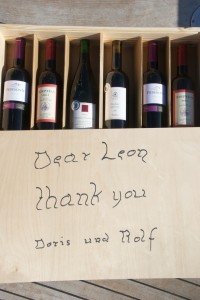 After their visit to Ellös, they wrote in an e-mail:

“Dear Leon, At our recent visit to Ellös, Doris and I could witness the convincing state and quality of the refit of our “Saida” with our own eyes. In this respect I would like to quote Walt Disney: ‘You can design and create, and build the most wonderful place in the world. But it takes people to make the dream a reality.’ The people, who make our dream come true regarding the refit of our good, 34 years old SY “Saida”, I have met and found in your Team in Ellös. The quality of the used materials, the professional competence of the involved people and, not to forget, the on-time-project management is excellent. We are looking forward to the day at the end of May when we can get “Saida” back into her element Water again, so beautiful and in many aspects much better than 34 years ago. For all this I would like to thank you and the Team in Ellös, that we have been able to get a close relationship with. Greetings Doris and Rudolf”