One of the very first investments for Regina Laska

While most things for Laska are still under quotation, we have made one of our first real important investments while sailing to Kiel, Germany, on our last summer cruises with our HR40 Regina. The fine pieces of equipment have been delivered onboard Regina to be sailed on its own keel to Ellös, where Regina Laska is waiting for us.

I started off by looking at some new loudspeakers for the car radio that is already installed in Regina Laska. The speakers were a bit small, I reckoned (much smaller than the ones we have on Regina).

So we began looking at some decent sized built in-speakers, looking like car speakers. Then came the idea of building in a sub-woofer under the sofa and use two small speakers hanging from the bulk-head – neat and small. This system would have beenAcoutimass3 by Bose.

The Bose 151 Environmental Speakers for outdoors

In the cockpit we wanted to replace our small speakers from Regina Laska as well. Not that they were too small in this case, but we needed their space for the Furuno instruments. In the first shop in Kiel I bought some environmental speakers from Bose called 151 that can cope with snow, rain and wind. Normally you have these by the pool or in restaurants outdoors, but I thought they would fit on Regina Laska in the cockpit, since we would have rain, wind but hopefully no snow in the cockpit. I just wonder where to install these now more exactly, but that’s another story, which I will have to revert to. 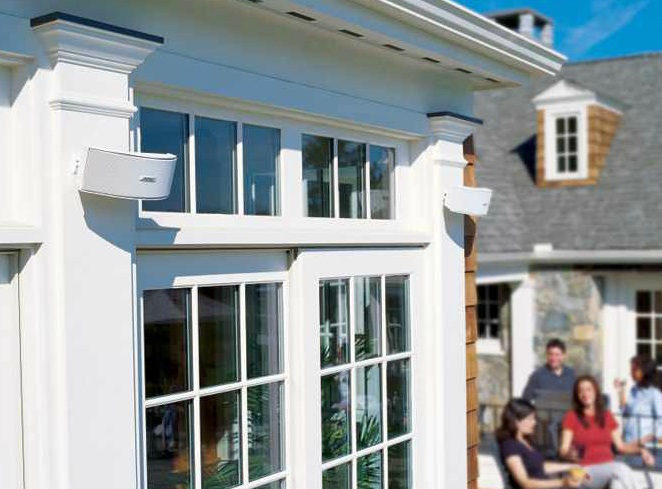 Suggested installation of the Bose 151. Will they fit in a cockpit?

The next stereo shop I went to was called “Hört sich gut an” (meaning “sounds good”). The nice salesman politely explained that the Acoutimass3 for the saloon I was planning to buy in the third shop I hadn’t come to yet, would not sound as good really, since I would only have a huge bass and then a micro-speaker for the high frequencies and nothing in between. It’s great for Star-Wars-like sound, as he said, or modern techno (which is not my favorite), but for vocal, jazz and classical music (how could he read my music taste?), I would experience a huge “hole” in the middle frequencies, which, for this kind of music,  are the most important ones.  So it would not sound “real”, he was afraid. 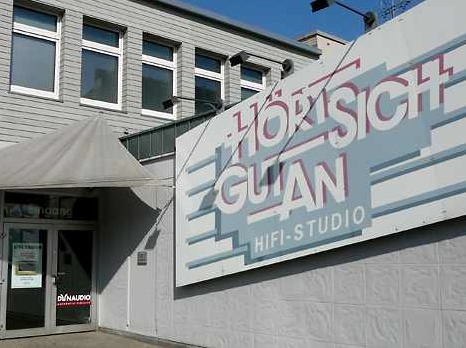 The “sounds-good” studio in Kiel where I went shopping

Now we went into his studio in the next room, where he had loads of different speakers set up for comparison. As an alternative to the Bose, he showed me some speakers from a company called ELAC, made in Germany, more precisely in Kiel, the very town we were in. He admitted, they were four times as expensive as the Bose I had planned to buy, but he just wanted to show me what he meant…

While he was putting up some nice music, I quietly measuring their size, since that is what mattered the most to me. They need to fit on the boat. I had hoped that I could politely say I was not interested due to their size rather than their price. What a surprise! By co-incidence, they fitted exactly onto the shelf under the cupboards in Regina Laska’s saloon. Fit’s like a glove! Well, if this is was not a sign?! 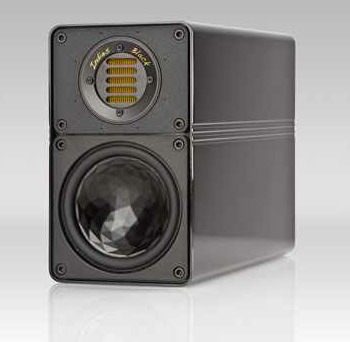 The secret of these speakers, I was told, is that the ELAC 310 are engineered in a such a way that they use the depth of the speaker. The membrane of the speaker is moving like a cylinder using a huge magnet at the back, instead of building a speaker with a large diametre. And they are heavy! Real steel and huge magnet and real screws. Made in Germany, you see.

We listened to various combinations of sources and speakers. The difference was overwhelming! You couldn’t believe how “real” it all sounded with these speakers! No exaggeration of the bass, no sharp metal highs, just natural sound, as if the entire orchestra was sitting in front of me. We played around with other speakers, large ones even, and then the smaller ones we are used to. No, this was convincing enough.

And after all – they fit so well on the boat!

“These great speakers can’t be run from a car stereo so well.” the knowledgeable salesman continued. “It would be a shame, wouldn’t it?!” So we went on into another room looking at some further high-end products.

Well, I thought, as long as they are less than 12.5 cm in height, it’s OK, since this is the magic limit to fit under the cupboard in the saloon of Regina Laska.

We stopped in front of a stereo system called Marantz MCR 503. Personally, I had heard of Marantz as little as of ELAC speakers, but apparently it’s the best brand you can buy. So I was told. To me, its most attractive feature was its height: 11 cm! 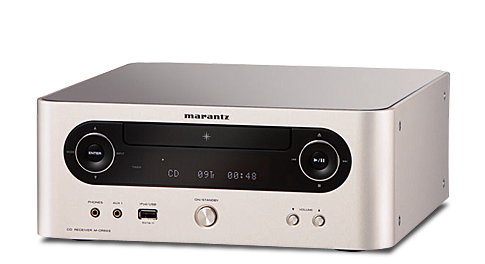 The Marantz MCR 503 is 11 cm high and fits perfectly, further to the fact that it produces a great sound

Now, with the best speakers in place that fit on the boat, and a stereo receiver that can provide a wonderful amplification, the source becomes an issue…. I learnt a lot about compression of music and digital-analogue converters.

Every digital sound, ranging from non-compressed CD’s to full compressed mp3, has to be converted to an analogue signal, which then is amplified and sent out to the speakers. If you, like I usually do, connect the headphone jacket of my iPod, iPhone or my computer with the analogue “Aux in” input of the stereo, you apparently use the converter built into the iPod or computer instead of the the one in the stereo. Much better, so I learnt, is to go directly with a digital signalfrom your iPod or iPhone to the stereo – in other using the USB-cable rather than the headphone cable. There was even a special USB-cable for this purpose for sale for 170 EUR, but, for the time being, I could use my standard-Apple USB-cable, as long as I promised not to use the ear-plug jacket going into “Aux-In”.

OK, I promised! So from now on, digital sound from the iPod will be lead via USB into the Marantz stereo, letting the Marantz taking care of the digital-analogue conversion. Fair enough!

And talking about digital signals…, he really hoped that I was not using mp3, was I? Aha?! To me an iPod is a sort of mp3-player?

Oh no, it was not! It all depends on which compression format you are using. mp3 is the worst format, apparently. Totally compressed! You can’t even hear where the individual instruments sit in an orchestra. Best is WAV or AIFF, since these are non-compressed formats and with today’s cheap storage capacities and huge hard-disks, there is no reason not to remain with the best uncompressed quality available. I was thinking about photography, and there, of course, I shoot in RAW format and not in jpg, so I could follow him talking about compressing music.

My homework now: To import my favorite CD’s once again in a non compressed format and then listen to the difference between mp3, ACC and WAF or AIFF.

It became a very interesting and expensive shopping tour!

P.S. Karolina was with Jessica at H&M shopping T-shirts for 10 EUR while I was on my own in the “sounds-good” shop…. No wonder!