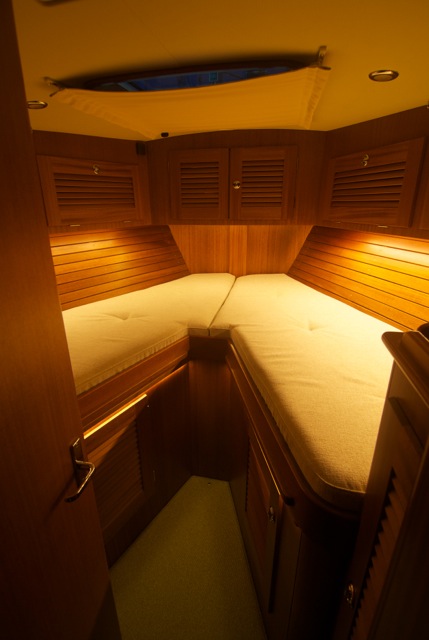 What type of WiFi amplifying system do you suggest to your customers and which one do you use on Regina Laska?

In order to receive good WiFi connection I mainly suggest to choose between:

Either:
Any WiFi Antenna + Bullet + PoE power
Or:
WiFiBat from Mailasail (consisting of antenna, built in amplifier and USB-cable all in one).

In order to distribute this amplified WiFi inside the boat, I use RedBox, which I have sold to a number of clients by now.

Obviously, there are many systems on the market, but these are the ones I have experience with.

The Bullet is not an antenna per se, but a small electronic device to be installed between the RedBox (or computer) and any type of external WiFi antenna. The WiFi Bat, on the other hand, everything comes together: Antenna and amplifying electronics in one device.

The Bullet has an Coax connection on one side for the antenna (to be chosen and bought separately) and an Ethernet connector on the other side to be connected to a computer or RedBox. You need to power up the Bullet by mean of a cheap passive PoE (Power over Ethernet) device using the ship’s 12V system to give external power to the Ethernet cable, see example on Amazon. The Bullet comes with a very sophisticated software called airMax. Luckily there are “quick guides” available for this, see here and here for two examples.

The bullet also comes in kits with PoE, cable and antenna in one. 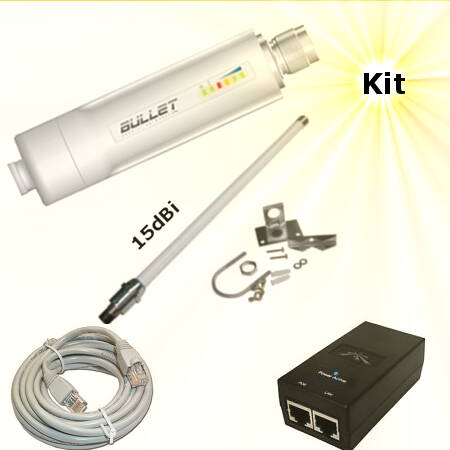 The Bullet is possibly a bit too sophisticated for many sailors and me, too, for that sake. I chose the Bullet, since it is Ethernet based (hence extremely stable) and a very big product in the world. Many use them to create hotspots (in marinas, cafés, etc) while I use it “the other way around” as a WiFi amplifying reception device. If you see what I mean: With the Bullet you can do anything and the features you can change in the software are so many that for many sailors it is too complicated. So, once it works, don’t fiddle around with the Bullet too much… If it ain’t broke – don’t fix it! 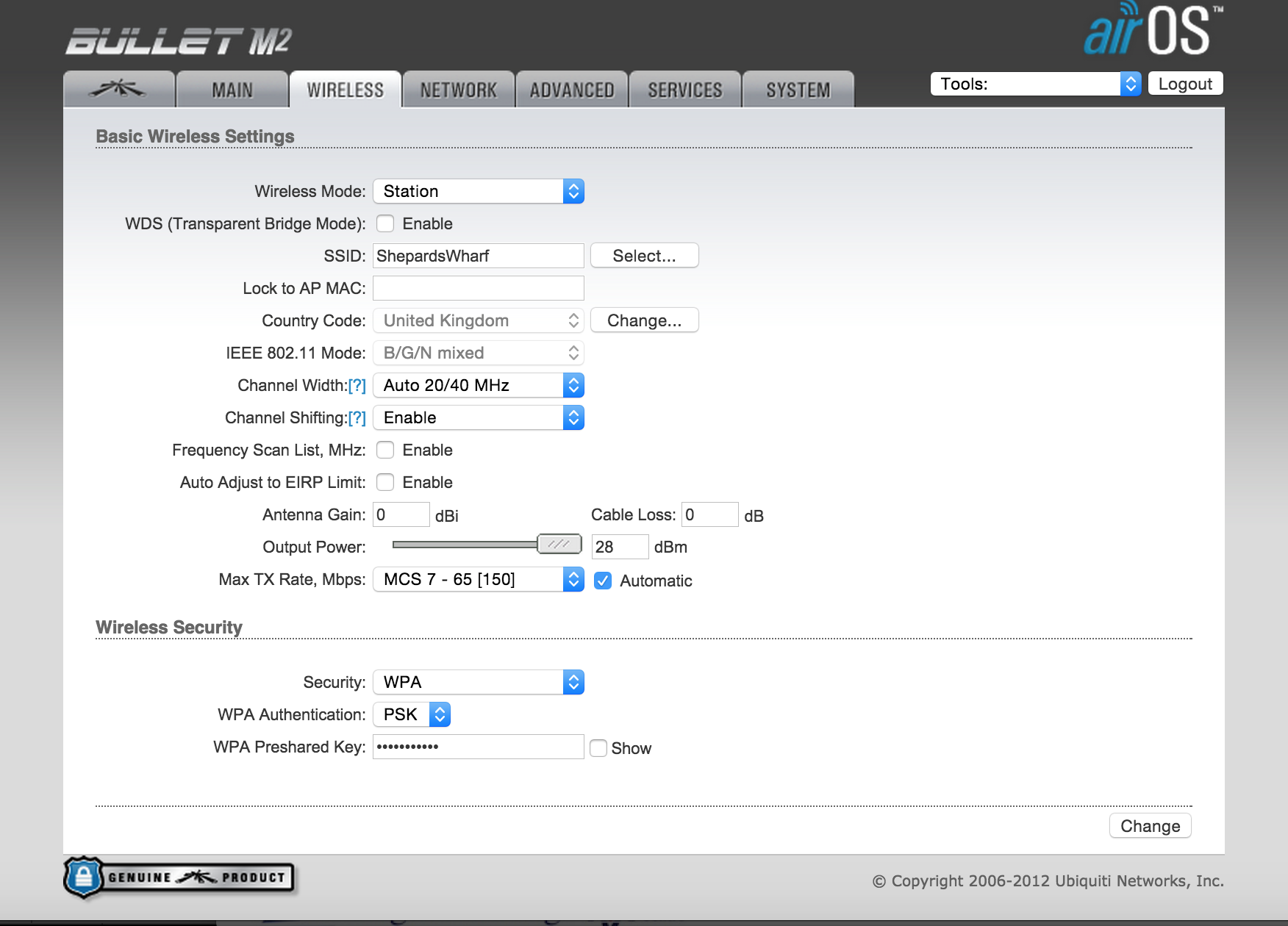 Having said that, I use the Bullet with great success plugging it into the RedBox.

As an alternative to the said Ethernet based Bullet, there is the mentioned WiFi Bat which you can plug into the Red Box. This works better “out of the box” (hahah!) since they both come from the same supplier (Mailasail) and the WiFi Bat and the RedBox are “made for each other” so to speak and are working so much easier together, especially software-wise.

The WiFi Bat is powered by its own USB-cable but if you use a longer cable (more than 5m) you need an active USB extension, that amplifies the power to be fed to the WiFi bat via the USB-cable. See example on Amazon here.

If you, unlike me, already have an RR antenna prepared for WiFi reception in your mast top, this can be connected to the Bullet via a Coaxcable. This way, you don’t need to add yet another antenna for WiFi, e.g. the WiFi Bat.

I didn’t have such a multi-function RR antenna in the mast top (with great WiFi reception up there, by the way!). Lacking the RR combo antenna in the mast-top myself, I have, instead, added a dedicated marine WiFi antenna to the Bullet from AC Marine called CEL24. 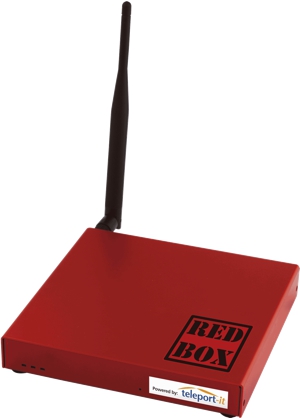 Now to the question why not plugging the Bullet or the WiFi Bat directly to the laptop and what’s the benefit to go via the RedBox instead. First of all, please do remember that it is totally feasible to connect the Bullet and the WiFi bat directly to a computer, but the RedBox does two extra things for your:

2. filtering and speeding up e-mails via Iridium or other satellite systems

The ship’s internal network is very useful since only the skipper has to fiddle around with the WiFi Bat or Bullet, eg  hook the boat onto the marina’s WiFi network with passwords etc. I only need to buy one WiFi license as well for the single receiver, being the RedBox in this case (some marinas charge per computer).

After having hooked up the RedBox onto the WiFi network (or any other supplier of Internet, such as cell-phone for that sake), I can distribute Internet onboard for all the others. The crew does not have to think of which network we are on or if we are on WiFi or Cell-Phone (or satellite, beware!). Me, as the skipper, can do all this inside the RedBox (I just enter “redbox” in the browser and get to the redbox gateway right away). From here, I can also choose what my crew may do and may not do over the internet. Today maybe only e-mailing without attachments (since we are on an expensive roaming system) are allowed, while tomorrow we might be allowed to surf the internet without any restrictions (since we are on WiFi). Guests only have to remember one WiFi network called “Regina Laska” and one password to get into the ship’s own WiFi network. The rest I have already done for them inside the RedBox in each marina. 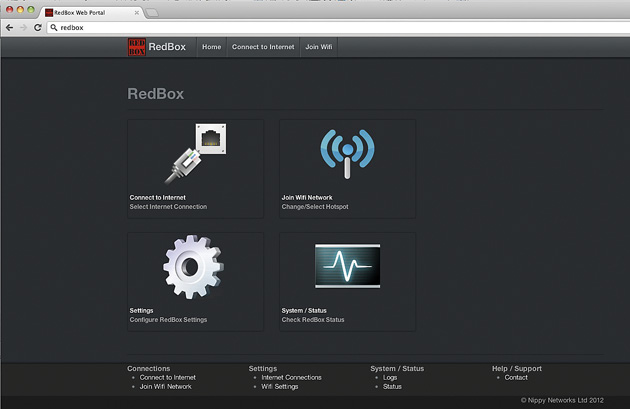 Anther good feature of having an own WiFi network onboard is that anything can be hooked onto it, such as my plotter, radar, music etc. So my guests can hook up onto the ship’s own WiFi network and follow the track, the plotter and the radar picture on their own iPhone or iPad, which is great for educational reason. We can all sit in the salon with an iPad each studying the radar picture normally only seen on the main plotter and the screen at the navstation.  Plus, I can be in my own bunk checking on what they are doing up there…. :-) 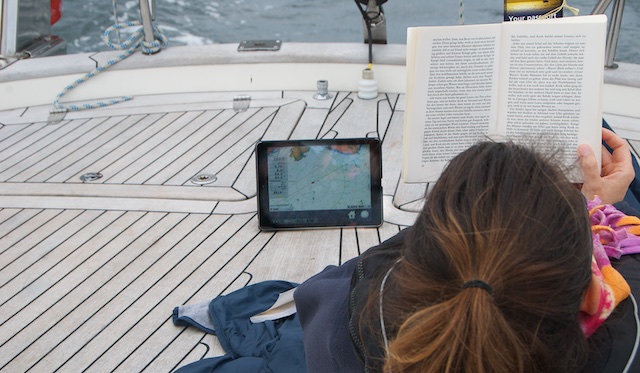 The second thing RedBox does is to filter out any attachments when e-mailing. If you really want to receive the attachment, it tells you what code to send to Mailasail and they re-send you the requested attachment. By this, the e-mailing system is not blogged up by big e-mails, but you choose what attachments you want. It goes without saying that GRIB-files are always passed through and that any updates from your PCs that are trying to sneak through the system into the internet are being blocked by the RedBox.

Further, any formatation of the text (colours, fonts etc) are being filtered out and only plain text is being sent via e-mail. Attached pdf’s and word-files are being changed into plain text files, so you can still read pdfs and word-files without having to pay for the non-useful information downloading the entire thing; you only get the text. All your e-mails are also compressed and sent efficiently. This is all done ashore by Mailasail and obviously before it is being transmitted via expensive satellite link.

There are other similar services on the market, but these all consist of software in the PC, possibly interfering with other programmes in the PC and you might need to have a dedicated ship’s email address. The big difference with the RedBox is that I use my standard e-mail address as the “sender” and people can send to my standard e-mailing address and they don’t even notice that I read via Iridium or be beware of attachments etc, since Mailasail and RedBox takes care of it all. Further, I have no special software in my computer, but I can write from any computer, iPad or whatever onboard that is hooked up onto the RedBox WiFi system.

In other words, the intelligence and software is not in my laptop or on my iPad but in a dedicated little extra computer called the RedBox that then is being used as a gateway by any type of computer or tablet without the need of any extra software installed.

I really like the RedBox but like with anything, it adds to your hours sitting fiddling around at the navstation, rather than enjoying the evening with a glass of wine. Having said that, the RedBox is extremely user friendly.